There are various buildings in Ardchattan Parish which are either preserved as ruins or now converted now into private dwellings. They help to tell the story of Christian worship here since the earliest days, when Celtic Missionaries arrived on our shores to live and teach the words of Jesus.

Little information is available to us from the early days. It is known that Columba and Moluag, holy men from Ireland, arrived on the Islands of Iona and Lismore respectively (not very far by sea from here) in the early 560's but records of mission work in those days (outside of the Monasteries) were seldom written down. However stones and place names do remain and along with oral traditions recorded later, they help to tell us a little of days gone by.

Locally other forces have brought changes too, weather damage to property, lack of money and demographic changes in particular.

Gaelic was the language of this parish - until 1984 our Ministers were fluent in Gaelic.

The earliest site of worship recognised in the Parish today is said to be at Craigneuk to the south side of Benderloch. Just a small, walled graveyard now, it once extended into the garden beside it and down below where the road now runs. 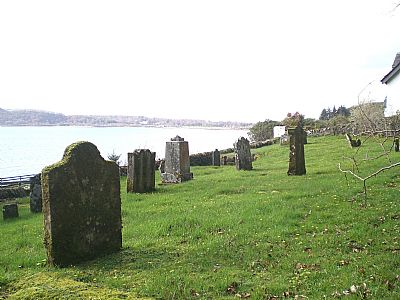 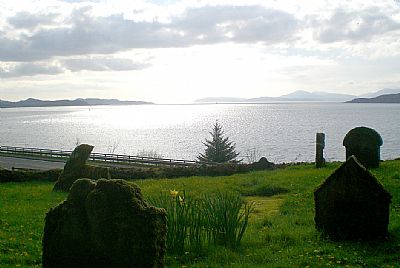 From here there is a wonderful view down the Firth of Lorn towards Mull and Iona . The name translates into English as 'Church of Columba' though it is not recorded that Columba founded this site of worship - some think it probable that missionary monks from Iona named it in recognition of his works and teachings.

A topographical account of the Highlands written around 1630 mentions a 'chappell called Killchallumchill in Beandirlogh' and the compilers of the OS map who visited the site in the 1870's were able to identify two walls of the old church building.

The ruins of this church are still to be found amongst gravestones above Ardchattan Priory (on the Bonawe Road). They probably date from the 15th or early 16th centuary, replacing earlier buildings on the site. Problems over the name of this site arose initially from the recording of the Gaelic spoken name with the written word and then it's translation from Gaelic to English. The first recorded Minister of the Parish was John McIlverie when Ardchattan was united with the Parish of Muckairn in 1639. At this time the Parishes were named as Baileveden and Kilespickerral respectively. The next Minister was Archibald McCalman (1641-1654). He was followed after a long vacancy, records from which time were lost, by the Rev. Colin Campbell in 1667. Rev. Campbell has been described as the 'most illustrious and longest-serving of all the ministers of Ardchattan and Muckairn'. He would have preached in both Baileveden and the Priory Churches, as well as across Loch Etive in Muckairn. 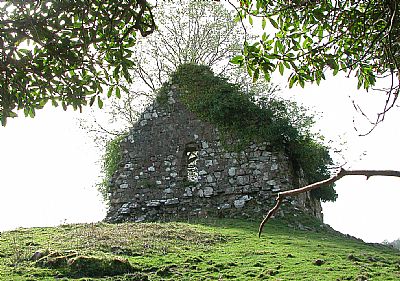 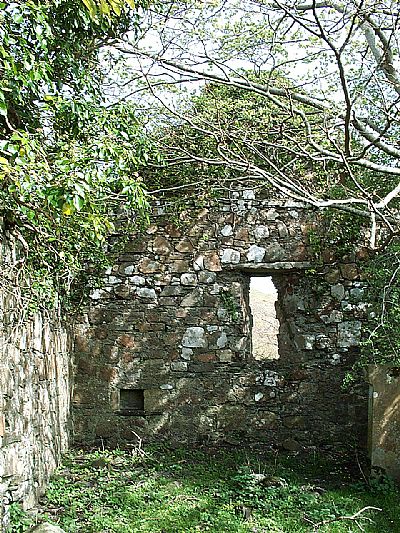 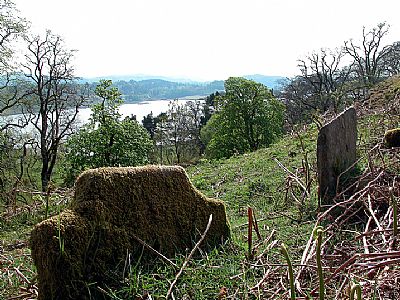 The Priory was founded in 1230, the monks belonged to the Order of Valliscaulium and followed the Benedictine Order of observance. Before their church was built at the Priory in 1236 the Monks would be expected to walk up the hill to the Church of Baodan for worship seven times every day. Following the death of the last monk, the then Prior was granted a Charter of the Priory lands in 1602. Some of the Priory buildings were converted into a private residence but part of the monastic church continued to be used for parish worship. 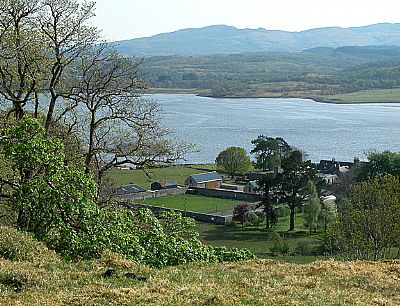 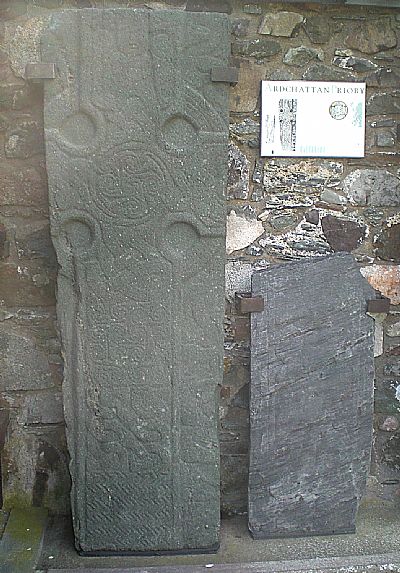 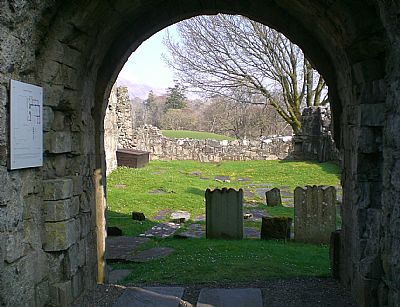 View of the Priory from Baileveden and inside the old Priory, 2005.

A Presbytery inspection in 1678 of the fabrics of "the old parish Church of Bailebhaodan and the Kirk and Choir of Ardchattan" found them both to be "ruinous and nothing but old walls". Rev. Colin Campbell died in 1726. A memorial plate to him can be seen in St. Modan's Church, Benderloch. He was succeeded briefly by Rev. A. Bannatyne in 1730 who translated to the Parish of Dores in Inverness in 1731.

A new Church was built by the shore of Loch Etive a quarter of a mile from the Priory. Only parts of two walls now remain of this building which incorporated stone from the Priory in its masonry. It is recorded as having had a centrally placed Communion Table as was the tradition then. The Minister at the time of its opening was Rev. James Stevenson (1732 - 1751), he was succeeded by Rev. Ludovick Grant in 1756. During this Ministry major repair work was required to the church building. The repairs were undertaken and a Manse was built adjacent to the church. This Manse was in continuous use by our Ministers until the 1980's when it was sold and a 'modern', more convenient residence was purchased. 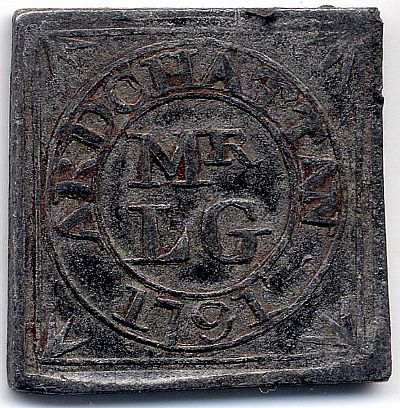 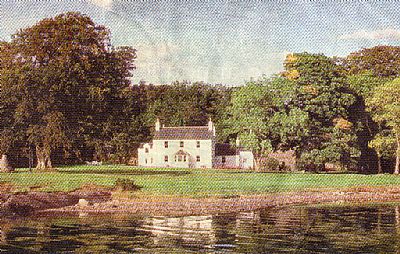 Ardchattan Communion Token of 1791. The Old Manse which was home to 8 ministers over 200 years.

Rev. Grant was responsible for the writing of the First Statistical Account of the United Parish. He was succeeded by George Campbell (1796-1817). Then, in 1817 the Rev. Hugh Fraser translated from the Presbytery of Nairn and was admitted to Ardchattan and Muckairn. In 1829 the two parishes were disjoined and he became minister of Ardchattan only. In 1830 the Ardchattan church building was again declared in a state of 'dilapidation', this time "unworthy of being repaired".

It was agreed that the site of the 1732 church building near the Priory was really not suitable and a new site at Achnaba was given by General Campbell of Lochnell, the Laird of one of the three largest estates in the Parish. The new Kirk built at Achnaba opened for worship on Sunday, September 17th, 1836.

The building work used masonry of local granite with sandstone dressings and included a session room and a room for the minister. Sir Duncan Campbell of Barcaldine & General Campbell both had rooms upstairs designated for their use (they each paid for the furnishing thereof), they also had their own stable on the site, now part of a car park. 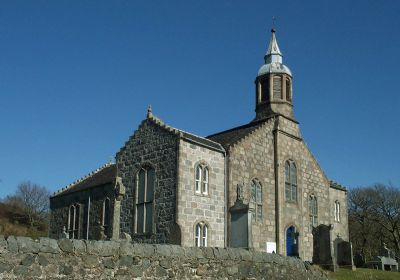 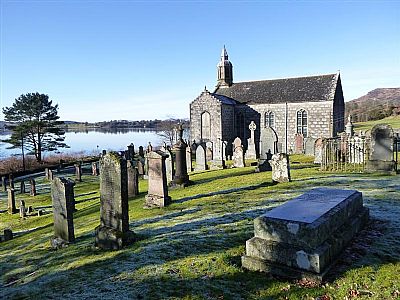 The church building remained relatively unchanged and unusually retained much of its original character. The horseshoe shaped gallery is supported on cast iron columns. The pews on the east side are original and some contain the wooden pegs used by the men to keep their hats on during the service. 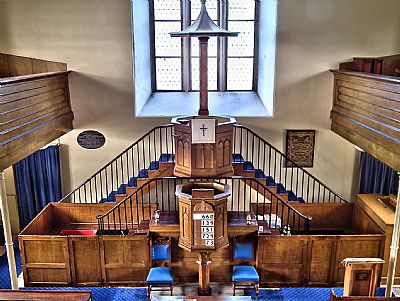 The long central communion table was once a common feature of Scottish churches.

The high pulpit, with sounding board above, enabled the minister to be seen and heard from all parts of the church and gallery.

Directly below this is the Precentor's desk from where the singing of the psalms was led. Our last Precentor, Hugh Campbell, died in 1931. Instrumental music had been permitted in the Presbyterian Church from 1866 but the first organ was only installed here in 1935 - this was an instrument which had previously been in use in the Free Church at Rhugarbh.

The Disruption in 1843 which divided the Church of Scotland led to the formation of the new Free Church of Scotland. Rev, Hugh Fraser was one of the many Ministers to demit their charges. He and the third of his congregation who followed him had a new church at Rhugarbh near Barcaldine (see below). His Ministry of the Established Church of Scotland in Ardchattan was followed by that of Rev. Donald MacCalman who served the Parish from 1844 until his death in 1873. ​He was succeeded by Rev. Hugh  MacLachlan (1874-1903) and Rev.John Archibald MacCormick (1903-1915 & 1918-1923) 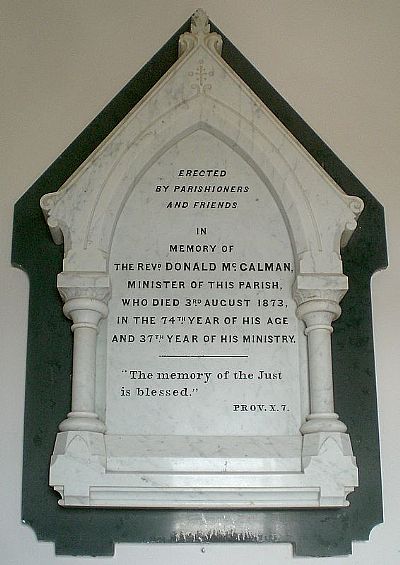 Ardchattan Kirk was closed for worship on Sunday 27th January 2019. The building is included on the Secretary of State for Scotland's list of Buildings of Special or Historic Interest.

In 1903 the Connel Bridge was opened. This allowed trains to run from Connel Ferry to the slate mines in Ballachulish and created a major thoroughfare across our peninsula parish. With this development in mind, the Rev. Hugh MacLachlan felt that a mission church should be built in Benderloch. Prior to this, the local community had been served by an occasional service in the village school and would go to Achnaba for the church service there - usually on foot. A huge bazaar was held in Oban and grants were approved. Sadly Rev. MacLachlan died before even the foundation stone was laid and it was in the early days of his successor, Rev. John MacCormick that the church was built. 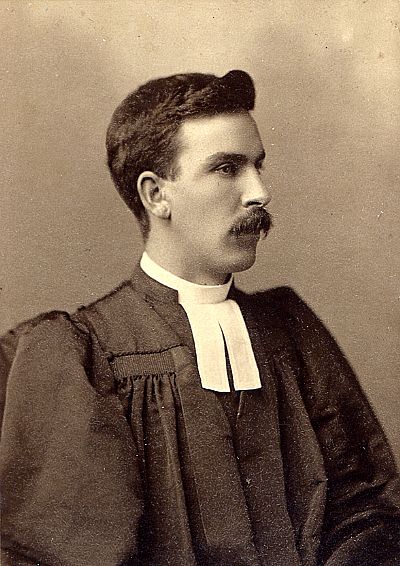 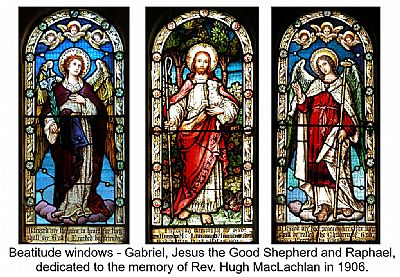 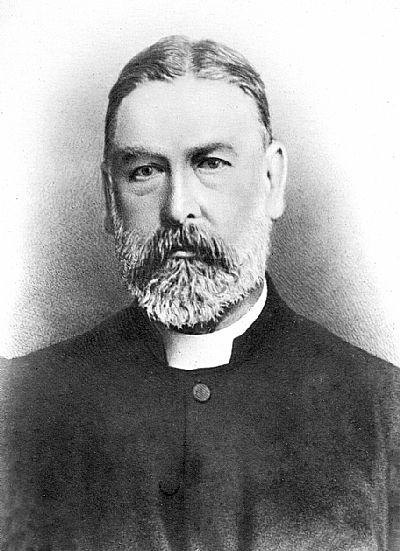 St. Modan's Church was opened in Benderloch on 17th May 1905.  It is recorded that practically all the people of Benderloch helped to lay out the grounds of their new Church with 'heartiness and willingness' prior to the opening. 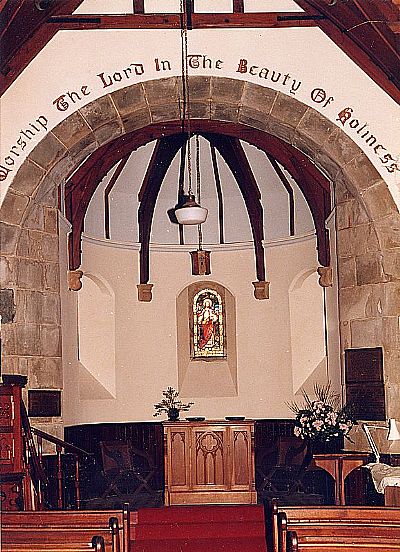 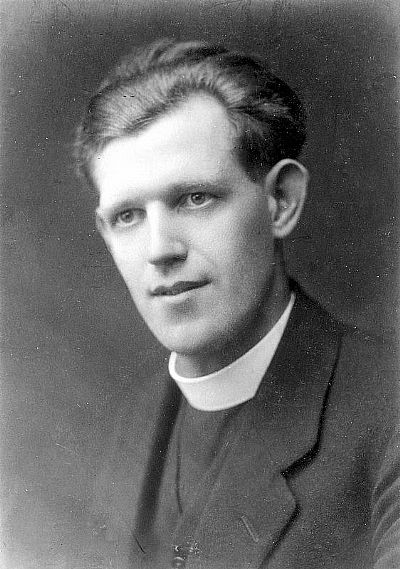 The words 'Worship the Lord in the Beauty of Holiness were caused to be painted on the arch above the apse by the Rev. Alex Macdonald during his ministry. 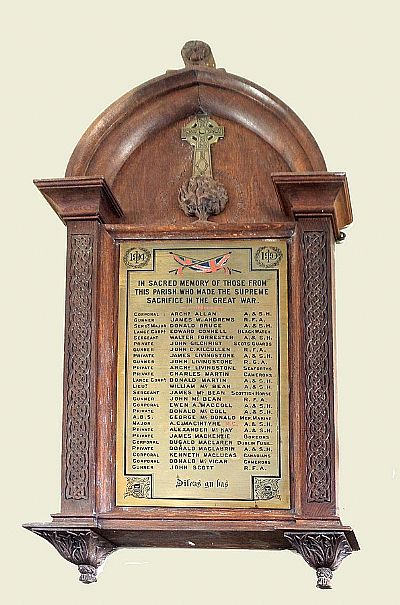 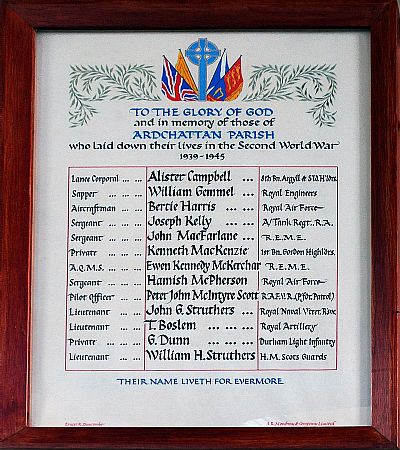 The War Memorial Plaques in honour of those from our Parish who died in the First and Second World Wars which were originally situated at the end of the nave in Ardchattan Kirk were transfered to St. Modan's in July 2019.

Following the Disruption a Free Church was made 3 miles north of Benderloch at Rhugarbh. Rev. Hugh Fraser, having had to leave the Ardchattan Manse, was obliged to live in Oban until he retired in 1850 after 43 years of Ministry in Ardchattan. 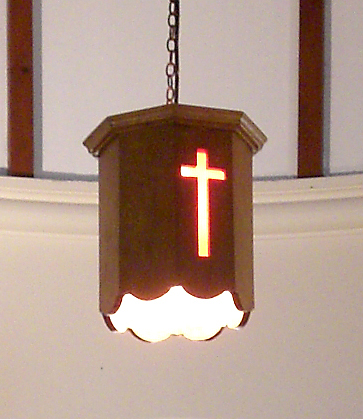 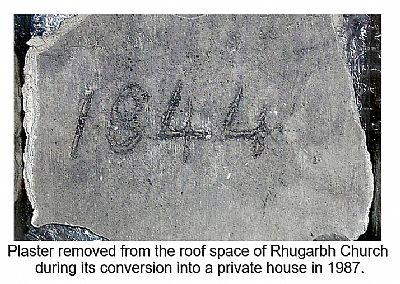 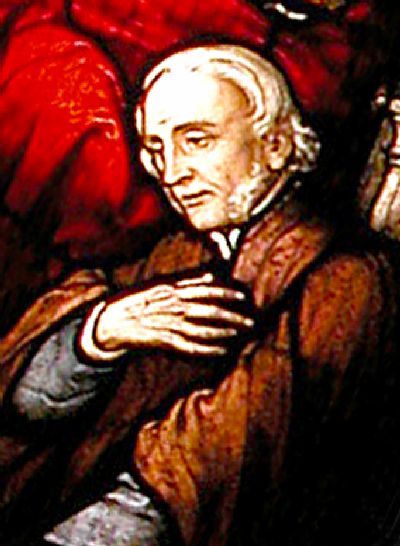 He was succeeded in the Free Church by the Rev. John Sutherland, the first occupant of the Ardchattan Free Church manse, who celebrated his jubilee in the ministry in 1910. His ministery was followed by those of Rev. Donald Cameron, Rev. Alexander MacKinnon and in 1927 the Rev. R.P. Aitchison. He moved to Mallaig in 1933 following the 1929 Union of Established and United Free Churches. Rhugarbh Church continued in use until the early 1980's when it was sold and converted into a private residence.

In 1843 when the Disruption took place, the son of the Ledaig School Master (one of the Ardchattan Elders) was among many who joined the Free Church. John Campbell was postman, a gardener and is known as the Ledaig Bard (Ledaig, meaning 'Slope on the Bay', is an alternative name for Benderloch). He converted a cave on the shore below his house near Craigneuk into a chapel. The chapel was twice wrecked by violent storms and restored, the services and Sunday School on the shore continued for 20 years. 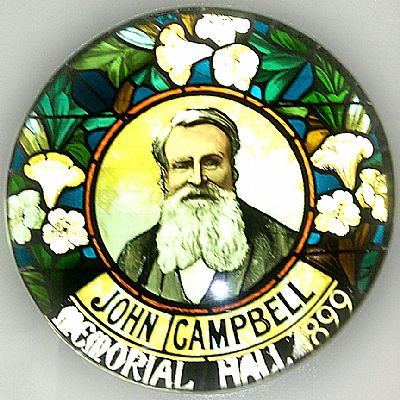 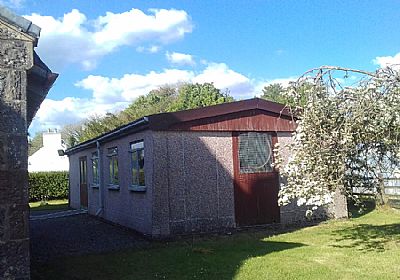 John Campbell died in 1897 and a fund set up in his memory was used to build a hall where his daughters continued to teach Sunday School for many years. In the end of the hall was a circular window with a lifelike portait of the Bard in coloured glass. This window was transfered to a new hall which was built in the grounds of St. Modan's Church in the early 1980's when the old hall was sold and converted into a private dwelling. The Campbell Memorial Hall is used regularly for Suday School, Church Meetings and various groups from the Church and wider community.

There are two other former church buildings in the Parish which have played significant parts in the history of the Church in our Parish and are now converted into private homes. These were The Church of the Holy Spirit in Bonawe (Episcopalian) opened in 1886, closed in 2009 and the United Free Church in Benderloch which opened in 1912 and was in use until after the Union of 1929. It was sold to be converted into a home in 1936. 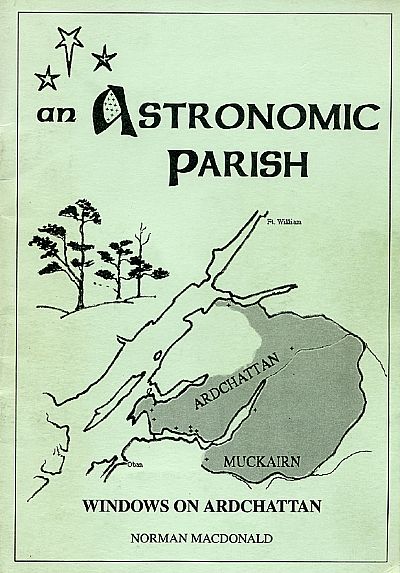 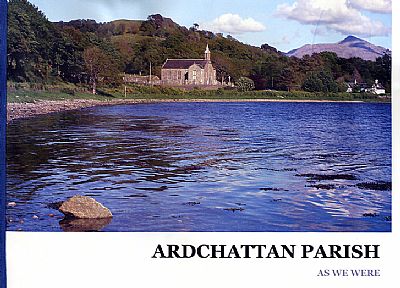 After his retirement from the ministry in 1984, the Rev. Norman Macdonald compiled an excellent short history of the incumbants of the Parish of Ardchattan, entitled 'An Astronomical Parish'. Printed in 1994 this booklet is now out of print but has been invaluable in the production of the above history.

In 2009, during the ministry of Rev. Jeff McCormick, the 'Scottish Year of Homecoming' saw an exhibition of copies of precious photographs loaned from across the Parish on display in Ardchattan Kirk. Some of these were included in a book of pictures and memories entitled 'Ardchattan Parish, as we were'.

This brief history was compiled in 2019. JMBE.

Archattan Parish Churches do not hold any records of births, deaths and marriages. To find out more about the history of our area we recommend Ardchattan Parish History.